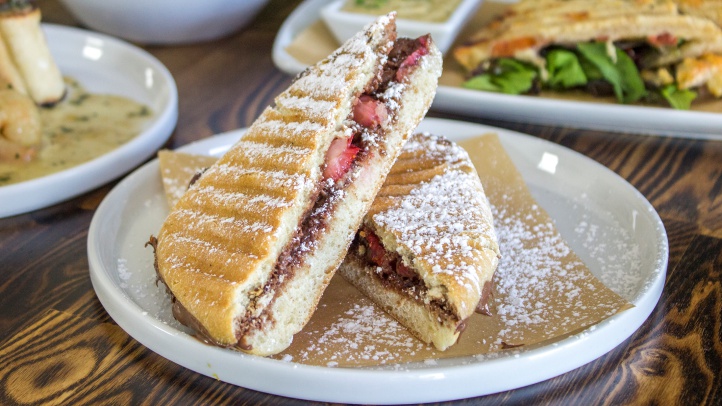 Happy Nutella Day: There are okay food holidays, there are great food holidays, and then there’s Nutella Day, which is all about everyone’s go-to paste-y hazelnut-chocolate fantasy spread. Not every eatery serves Nutella, but a couple that do, Bacari PDR and Bacari West Adams, will spend Tuesday, Feb. 5 serving Nutella Paninos for a buck each. Could Taco Tuesday be supplanted by the Nutella Panino? Well, perhaps on one especially sweet day of the year. There’s a limit of one per table, and, yep, you can ask for strawberry or banana, those classic Nutella complements.

FIDM Film Costume Exhibit: Seeing an especially stylish get-up on the silver screen? It can make anyone who loves a nice outfit swoon. But finding that moment IRL is far harder, unless you visit DTLA when The Art of Motion Picture Design is on view. The annual exhibit, which turns 27 in 2019, features over 100 of the actual costumes seen in some of the biggest movies of the previous year. Opening date is Feb. 5, the gallery is closed on Sunday and Monday, and admission is free.

Chinese New Year: Shanghai Nights: There are still so many lovely Lunar New Year festivities ahead, but joining one on a boat is a rarer pleasure. The boat in question is the Queen Mary, the date is Tuesday, Feb. 5, the spot is the opulent Queen’s Salon, and acrobatics, dragon dancing, and other traditional touchstones of the holiday will be on delightful display. Dinner begins the evening, with entertainment to follow (oh yes, there shall be lion dancing, too, as well as a guzheng ensemble).

“Cinderella”: The timeless fairy tale is often set in some castle-laden land of yore, but this sweeping take from theatrical visionary Matthew Bourne is set in London during the time of the Blitz. The costumes and set reflect this wartime moment, but the story itself takes its emotional cues from the story we all know. It dances into the Ahmanson, complete with “Prokofiev’s magnificent score,” on Tuesday, Feb. 5 for a magnificent month-plus run.

To Disney, with Love: So you’re a fan of the wonderful Wurlitzer organ inside the El Capitan Theatre, and you can’t get enough of classic Disney tunes? Monday, Feb. 4 is your night, for organist Rob Richards will play a pops concert devoted to a host of heart-brightening Disney favorites. It’s two hours long, and there’s no film to screen, keep in mind. You’ll also have an intermission, too. This is all happening, by the by, in one splendid cinematic palace, a space that adds to the oomph of the beloved tunes.