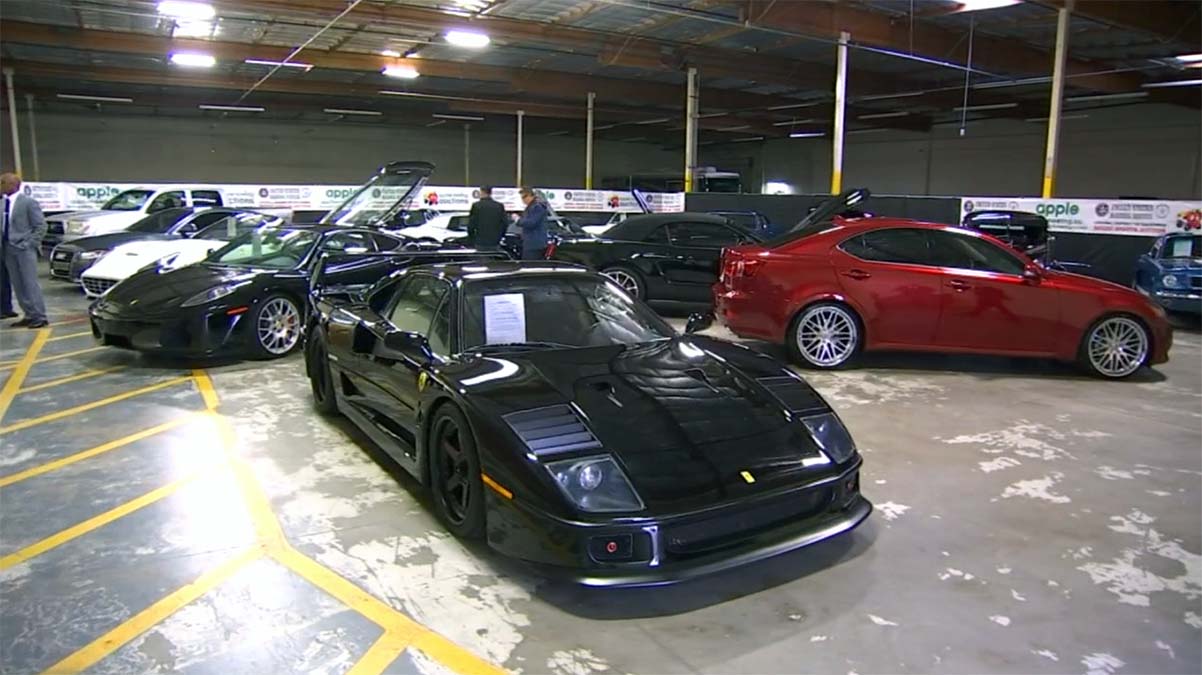 A restored Ferrari F40, one of the most celebrated supercars ever built, is one of the high-end cars seized in a federal fraud investigation that will be up for auction this week.

The menacing black 1991 Ferrari, a few 1960s Corvettes, vintage Chevys, and a 1970 Plymouth Roadrunner coupe are some of the items that were forfeited as part of a long-running investigation into Los Angeles parking lot operator Richard Scott. He pleaded guilty in 2018 to defrauding the U.S. Department of Veterans Affairs out of more than $13 million.

And, at first, crime did pay.

Wealth acquired from the scheme allowed for the purchase of condos in Santa Monica with an estimated value of $7 million, a Cigarette racing boat and cars, eight of which will be part of the U.S. Marshal’s auction. As part of a plea agreement, all assets acquired through the scheme were forfeited and the operator was required to pay about $12.6 million in restitution.

Bidding in the online auction began Jan. 28 and continues through Feb. 11.

The F40 represents a definining moment in the storied automaker’s history — some say it’s everything a Ferrari should be in terms of raw performance and thrills. This, however, is probably not the definitive example of an F40, but bids were up to $503,000 on Tuesday morning.

A pristine example of an F40 sold for $1.7 at auction last year in Monterey.

“Mr. Scott has quite the taste in cars,” said U.S. Marshal’s Office Assistant Deputy Chief Joseph Exner. “He definitely enjoyed his high-dollar cars. He’s also got some older cars that probably gained in value. His car collection is more of, ‘Look at me. Look at how much money I have.'”

Located in Chino, there are a few things potential buyers should note about the F40, including that the car was damaged in a crash in August 2011. It was restored on the Discovery show “Fast N’ Loud.”

Money from the auction will either be disbursed to victims or distributed among agencies that helped with the investigations.

At the time of his arrest, investigators seized more than $213,000 from the parking lot operator’s residence, cash that the U.S. Marshals office said was skimmed from VA parking lots. Bank and brokerage accounts had more money, according to investigators.

As part of the 15-year scheme, the Department of Veteran’s Affairs was defrauded out of money that should have been used to pay for parking lot operations on the agency’s Los Angeles medical campuses. The scam also resulted in $300,000 in bribes to a VA contracting officer.

The majority of the illegal activity occurred at the West Los Angeles VA Medical Center near Westwood. It included parking for UCLA baseball games, the Wadsworth and Brentwood theaters, and the PGA golf tournament at the nearby Riviera Country Club.

It’s estimated the operator under-reported about $4.6 million in revenue and an unknown amount of cash collected at parking lots during the scheme.

“They say crime doesn’t pay. Initially, it may have, but eventually it’s going to catch up with you,” Exner said.