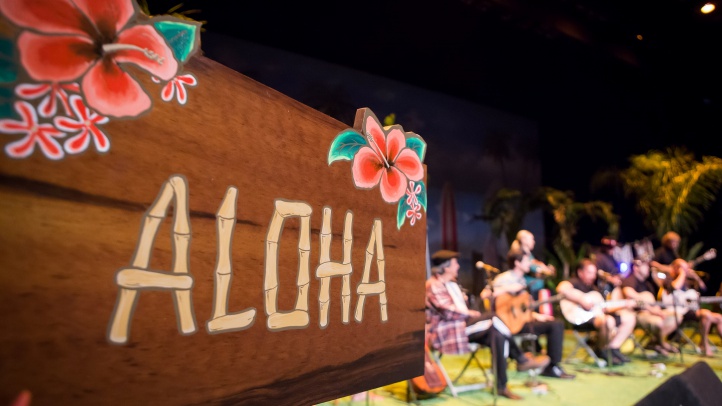 An airplane? A boat? Another form of transport that might rely upon wheels, rails, or wings?

Spoiler alert: Such conveyances can whisk you from one spot to another, in a matter of minutes, hours, and occasionally days. Meaning that you’ll need to plan some time in the getting-there, if you indeed want to alight in a nearby or distant land.

But here’s an instantaneous way to make the journey, a truly transportive tunnel that takes you to another location in mere seconds: music.

Put on a song that summons the beauty, history, beaches, and breezes of, say, Hawaii, and you are, in your mind, standing ankle-deep in the waves of Lanikai Beach.

That particular conveyance will be departing, via musical notes and dance movements, on Sunday, Jan. 20 at the Redondo Beach Performing Arts Center. For that’s the when and where for the yearly Southern California Slack Key Festival and Island Marketplace, a celebration of Hawaiian music, foods, and crafts.

The performer line-up is as lengthy as path wending through a grove of loulu palms. Look for George Kuo, Kawika Kahiapo, and several other slack key greats to be on the performing arts stage, along with a cadre of talented hula dancers.

Happening concurrently, and free to enter? The Island Marketplace, which will feature shaved ice, traditional Hawaiian eats, and several craft vendors, too. Actually, that begins earlier in the day, at 11 a.m., and will wrap up at 5 o’clock.

Ready to be transported, without boarding a plane or boat?

You will need to convey yourself to the Redondo Beach Performing Arts Center, which will be home to the spirit of Hawaiian music for a few felicitous hours on a chilly wintertime Sunday.