It seems Florida residents aren’t the only ones making use of their pools to cool off from the heat.

On Instagram, gator rescuer Paul Bedard shared a picture with an almost 9-foot alligator he caught in a Parkland resident’s pool Tuesday.

The gator had made its way through the pool screen enclosure and into the water.

Bedard wrote in the post’s caption that with pool rescues, he usually tries to “play around” with the gator in the water until they’re tired, to prevent them from biting or slamming into the concrete and hurting themselves on the way out.

In this case, Bedard wrote, the gator was “super mellow,” and allowed himself to be caught and taped up from the front. After some water play to drain the animal’s energy, he was safely carried out.

“He didn’t really give me a hassle at all, it was basically as smooth and easy as it ever gets. Thank you Lord, much appreciated,” wrote Bedard. The gator turned out to be 8 feet, 8 inches long.

Bedard and his coworker Gabby Scampone are known as the “Gator Boys,” rescuing alligators from Florida backyards, swimming pools, garages and even bedrooms. According to their website, the captured animals are taken to Everglades Holiday Park. 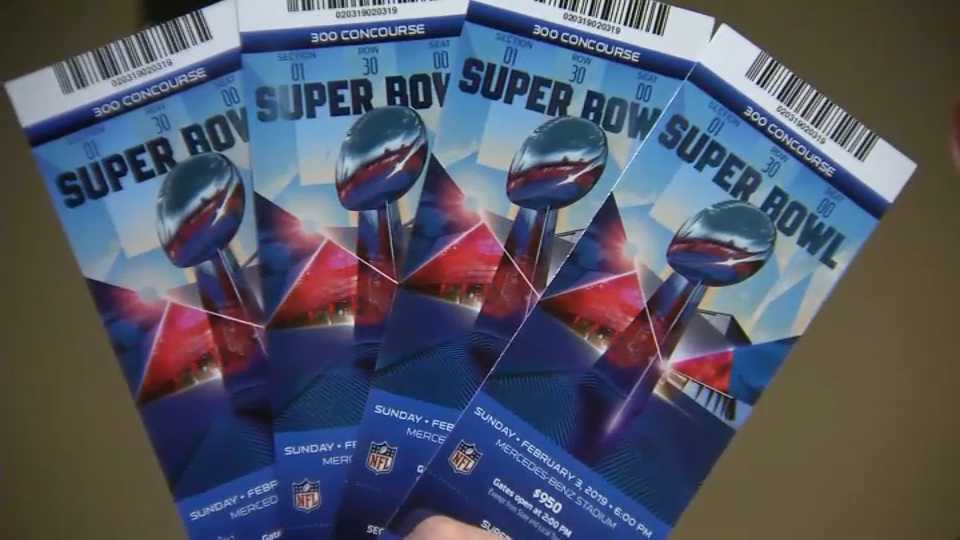 Flight from Los Angeles to Atlanta? $200.

A ticket to the Super Bowl? Priceless.

Super Bowl LIII is the hottest ticket around, but two large-market teams, coupled with an abundance of supply, and lower-than-normal demand, could provide a bargain opportunity for NFL fans in Atlanta this Sunday.

Thousands of fans have flocked from both Boston and Los Angeles to watch the dynasty-driven Patriots play the up-and-coming Rams in what is sure to be a titanic clash of two of the best offenses in football.

Millions of fans will be watching the game on television across the world, but only a select few will be inside the Mercedes Benz Stadium in Atlanta to witness the big game live and in-person.

Despite the fact the Super Bowl is less than twenty-four hours away, if you’re reading this, you could still be one of those people.

To see what a ticket to the Super Bowl costs the day of the game, we must first see how we got to this point, for the journey of a Super Bowl ticket going from imagination to reality within one’s grasp, is a rollercoaster ride that changes day-by-day, hour-by-hour, and minute-by-minute.

Two weeks prior to Super Bowl Sunday, the “get-in” price was hovering at $3,500. According to StubHub, the average ticket price was selling for $5,555 with most of the sales coming from Georgia, likely by buyers in Atlanta who were hoping to sell the tickets on the secondary market once the teams were announced.

By Monday, January 21 the matchup was set: The Los Angeles Rams would take on the New England Patriots in Super Bowl 53, each winning their respective conference championships over the New Orleans Saints and the Kansas City Chiefs.

Two big city teams with a historic rivalry between them must make for higher ticket prices, right? Wrong.

Despite the sports history of LA and Boston (most recently in the World Series when the Red Sox defeated the Dodgers 4-1), ticket prices dropped over 12 percent after Championship Sunday, with the “get-in” price falling to under $3,000 and over 4,000 tickets available on the secondary market.

“For the Patriots, the thought was it was winning fatigue,” said Chris Leyden, Communications Manager for Seat Geek in an interview with NBC LA. “The Patriots are playing in their ninth Super Bowl in the last two decades. There’s some though that people in Boston would be sick of going to the Super Bowl.

“As for the Rams, they were unknown. The team has only been in the LA market for three years, how long have they built up a fan base? Also, travel is further. Our research shows that sometimes winter cities like to travel to the Super Bowl as an escape to warmer weather, but that’s not the case in LA. If you’re going just for the game, rather than a nice little vacation, I think those factors have all worked against the Rams.

Leyden also went on to say that the ideal matchup for ticket sellers on the secondary market would have been the Saints versus the Chiefs, as New Orleans is driving distance from Atlanta, and comes with a proud fan base. The Chiefs on the other hand, have not won the Super Bowl in 50 years, so the opportunity to see their team hoist the Lombardi Trophy would have been a huge driver for fans in Kansas City with a lot of pent up excitement.

Despite Leyden’s thoughts on the lack of demand from Rams fans, the Los Angeles market was actually the first to purchase their tickets for the Super Bowl, call it lack of experience, or being a novice, but as soon as Greg Zuerlein converted that 57-yard field goal in overtime to beat the Saints, over 13 percent of the initial sales on StubHub came from California.

“Super Bowl ticket prices would make the perfect curriculum for an Economy 1 class,” said Leyden. “It is literally the laws of supply and demand at work. When the Saints lost that game to the Rams, we saw a $300 drop in the get-in price, and another drop after the Patriots advanced as well. The prices have bounced around since then, and started to pick up just after the Pro Bowl with seven days left before kickoff.”

One week before the big game, prices had fallen even further, with the “”get-in” price dropping to $2,700 and the average price of admission falling to $4,600 with over 2,800 tickets remaining in the secondary market.

Sales in Massachusetts skyrocketed as the prices dropped, with over 18 percent of the ticket sales coming from the Boston area.

“Being on the ground here in Atlanta, there are definitely more Patriots fans than Rams fans,” said Leyden. “Patriots fans have travelled well, but the Rams have actually exceeded our expectations.”

That brings us to Saturday. With one day before the big game, prices have slowly steadied, with the “get-in” price before the Super Bowl, hovering at around $2,900, the average ticket price at $4,380, and still over 1,600 tickets available on the secondary market.

StubHub said they saw an increase in sales in the final few days before the Super Bowl, with over 30 percent of their total sales coming in the last five days. If you plan on buying a last-minute ticket the day of the game, StubHub says that every ticket purchase comes with a complimentary ticket to the ATL Tailgate party at State Farm Arena prior to the game.

So if you don’t mind a light wallet, and want to catch the Rams and Patriots in action, head over to StubHub and buy your ticket on Super Bowl Sunday, but before you do, Leyden has one last piece of advice for you:

The New England Patriots take on the Los Angeles Rams in Atlanta, Georgia.

See all the celebrities at Super Bowl LIII in Atlanta, Georgia.