The pilot who died when his Cessna airplane broke apart and crashed into a Yorba Linda home Sunday, also killing four people inside the home, was carrying fake credentials leading to authorities falsely identifying him as a former Chicago police officer, authorities said Tuesday.

NBC4 spoke with a woman who identified herself as 75-year-old Antonio Pastini’s daughter Monday, who was mourning the loss of her father. Julia Ackley said the pilot, who was also called Tony, was a former Chicago police officer.

The Orange County Sheriff’s Office said Tuesday that Pastini was carrying false credentials with him in the crash that led to the National Transportation Safety Board to incorrectly identify the pilot.

Pastini’s daughter also told NBC4 Monday that the pilot was born under a different name, Jordan Isaacson. She said he was an experienced pilot and a popular businessman who lived in Nevada. She said he also owned a sushi restaurant, a tree farm in Oregon and also has a twin brother. 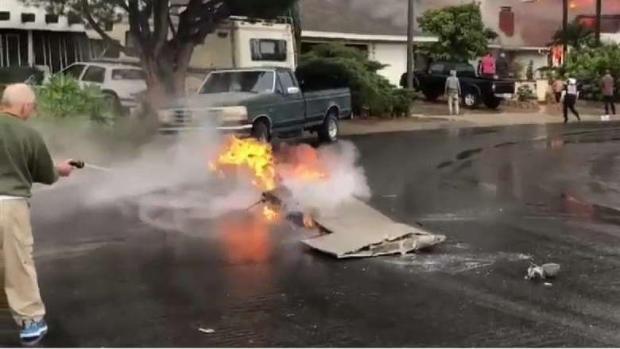 NBC4 is reaching out for comment from Ackley regarding Tuesday’s revelations about his identity.

The deadly crash occurred Sunday in the 19000 block of Crestknoll Drive at about 1:45 p.m., Orange County Sheriff’s Department spokeswoman Carrie Braun said. The 1981 twin-engine Cessna 414A took off from Fullerton Municipal Airport about 10 minutes before the crash, according to National Transportation Safety Board Investigator Eliott Simpson.

No information is available yet regarding why the plane crashed, Orange County Fire Authority Capt. Cameron Rossman said.

The pilot was flying alone when the plane broke apart and crashed, igniting two homes.

NTSB investigators gathered evidence Monday and picked up the pieces of the aircraft before taking it to a storage facility in Phoenix, Simpson said. A preliminary crash report will be available in 10-14 days, he said.