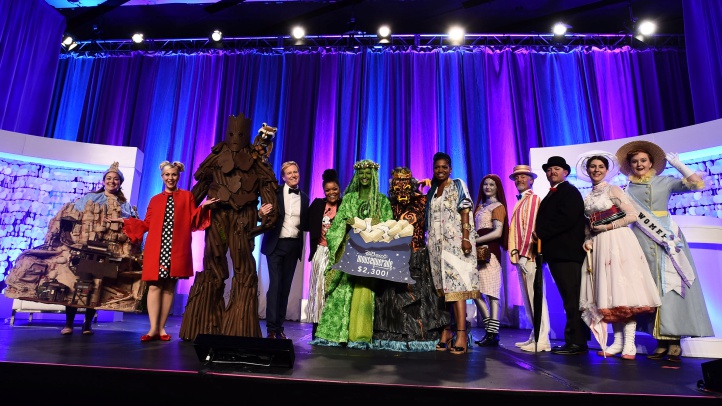 Name five Disney characters off the top of your head.

Now try for fifteen, in under a minute.

Can you name every Disney character, seen on film, the small screen, and in the theme parks, in under an hour?

We’d ask the Fairy Godmother to wave her wand in our direction, to give us the ability to do just that. Because there are a lot of Disney icons out there, making the task of choosing the perfect costume for the annual D23 Expo Mouseqerade as challenging as naming all 101 Dalmatians.

But choose, you should, for the annual Disney-everything fan convention is on its way, in August 2019.

Would you like to sweep across the stage at the Anaheim Convention Center, for Mouseqerade judges, while sporting a spectacular themed Disney costume, one that you created over several months?

Better start shopping for fabric: Submissions have opened, with a deadline of March 15, 2019. Ashley Eckstein and Yvette Nicole Brown will again return as judges at the popular event.

Will you go for a Mary Poppins look, or perhaps Pinocchio, or Miss Bianca from “The Rescuers”? Or will you be inspired by the fact that, yes, we’re heading into the 50th anniversary of the Haunted Mansion?

Who will take on the attraction’s beloved tightrope girl? Or perhaps the singing stone busts in the graveyard portion of the beloved New Orleans Square attraction?

There are five categories in all, including Worlds of Adventure and Casts of Characters.

Read all of the details, then get to dreaming, and making, dear Mouse mavens. Aug. 23 through 25 is, yes, still a half year away, but, like a sorceror casting a spell, time has a way of flying like a broomstick on the wind.