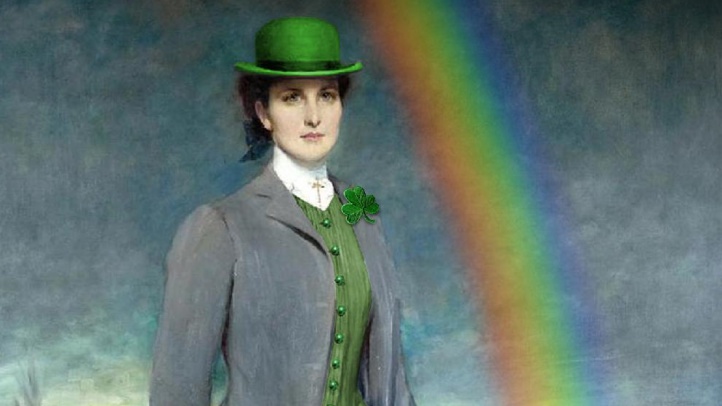 There’s no St. Pageant’s Day, but there is, of course, a St. Patrick’s Day, and it is coming up in a matter of weeks.

And in a matter of just a few months after the shamrockingest day of the year? Pageant of the Masters, the world-famous “pose inside a painting” spectacular, will open in Laguna Beach.

What do these two things have in common?

Well, for starters, any person who loves both celebratory occasions involving corned beef and green garb, as well as unusual stage productions rocking a lot of history, will feel lucky twice over.

For there’s a Pageant of the Masters sale afoot, through March 17, 2019, and it is all about giving tableau vivant fans the chance to score a seat for seventeen bucks.

That’s right: The Pageant of the Masters St. Patricks Day sale, which has now begun, will place you in a Director’s Tier Side Seating seat, for $17, Sundays through Fridays during the show’s run.

The mysterious theme this year? It’s “The Time Machine.”

The meaning of “tableau vivant”? You know this one, for sure. It’s where people pose inside recreated paintings and sculptures, all to form living artworks, which is at the heart of the annual event.

An event that is known for its sold-out nights and hard-to-score seats.

So a sale, just ahead of and including St. Patrick’s Day, a deal that offers $17 tickets?

But do the actors on stage, the ones posing “inside” paintings, also feel lucky?

Surely they must, to participate in such a lauded happening. We’d also feel lucky, if we were on stage at Pageant of the Masters, if we didn’t sneeze, or hiccup, during our time in front of the audience.

Of course, such moments only add to the charm, allure, and ultimate humanity of this utterly enchanting event. An event that is, again, known for its sold-out nights, so best embrace your luck quickly and land upon a $17 seat.