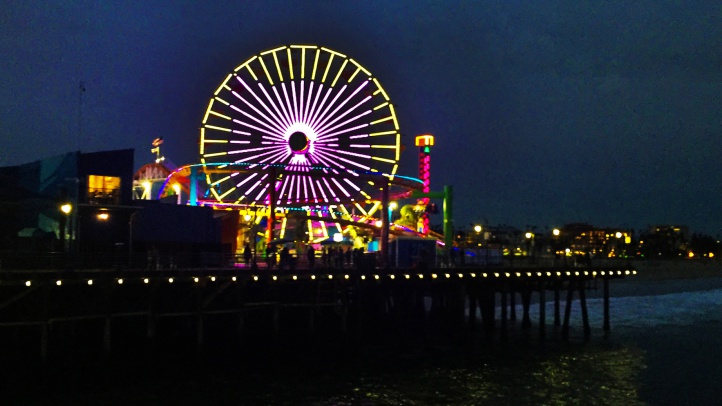 Saying that the Pacific Wheel, the solar-powered Ferris wheel found inside Pacific Park at Santa Monica Pier, goes big on a regular basis?

Well, that’s a big ol’ obviously, obviously. Because when you’re an attraction reaches for the sky, and stands at an impressive 90 feet, and rocks 174,000 LED lights, “big” is part of your routine.

But routines get a little more exciting when a major holiday arrives, one that looks to the coming year in an auspiciously hope-filled way.

That’s when you stop going big, and start going pig, at least if you’re ready to celebrate the Lunar New Year.

The Year of the Pig is here, hurrah, and the ocean-close landmark will welcome this oinkful occasion with a glittery glow on the evening of Tuesday, Feb. 5.

“When Pigs Fly” is the theme. It’s a theme that’s so cheeky and so cheerful it’s bound to curl any tail or summon a joyful grunt.

Should you stop by to admire the Ferris wheel after sundown but before midnight, you’ll spy all sorts of fabulous things on the huge side of the attraction, including “Happy New Year” in Chinese and various patterns sparkling in both red and gold.

Oh yes, and there shall be a pig image, a really big pig, perhaps one of the biggest pigs ever, adding adorableness to the evening.

It’s all free to see, though, of course, riding the wheel requires a ticket.

Can’t make it to Santa Monica? There’s a live cam, so you can still have a swine time by tuning in.