The Lakers were caught in the purple rain.

Andrew Wiggins and Karl-Anthony Towns combined for 50 points and the Minnesota Timberwolves outlasted the Los Angeles Lakers, 120-105, on Thursday night at Staples Center.

The back-and-forth battle featured ten different lead changes before the T-Wolves pulled away in the fourth and final quarter, where Minnesota led by as many as 17 points.

“We’ve had some great team wins, but guys banding together all the way from 1 to 16, we were great,” said Timberwolves interim head coach Ryan Saunders of the win. “I can’t say enough about those guys staying ready. That’s why I love this team.” 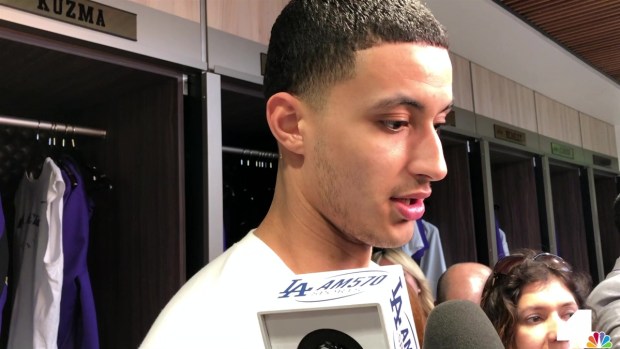 Towns finished with a game-high 27 points and 12 rebounds, and Wiggins had 23 points and 8 rebounds. Taj Gibson had a double-double with 14 points and 10 boards and Jerryd Bayless was brilliant with 16 points off the bench.

“JB [Jerryd Bayless] came in and made some shots and played great defense,” said Towns of Bayless who had to step in for Derrick Rose who injured his ankle. “We did a great job all game playing as a team.”

As complimentary he was about Bayless, Towns was even more excited about Wiggins who took over the point guard role late in the fourth quarter.

“Whe he’s playing like the way he played tonight, he’s almost unstoppable,” said Towns. “When he’s going up to dunk on people and he’s playing with an aggressive mindset, no one can stop him.”

Wiggins said he felt comfortable at the point, but it was his aggression and ability to stay calm under pressure that ascended him late in the game.

“I did what my team needed me to do,” said Wiggins of the fourth quarter. “They put the ball in my hands to go out and make some plays and that’s what I did.”

Los Angeles led 61-58 at the half, but the Timberwolves went on a 12-0 run as the third quarter came to a close and the fourth began.

“I thought we should have had a bigger lead in the first half,” said Lakers head coach Luke Walton. “We had a lead and then in the third quarter, but they just pushed us around.”

Rajon Rondo returned from a 13-game absence and provided a spark for the Lake Show in the starting lineup. Filling in for the injured Lonzo Ball, Rondo scored 15 points and dished out 13 assists.

“I don’t know what I looked like, but I felt fine,” said Rondo after missing the last 13 games with a right finger injury suffered on Christmas Day. “I got winded a couple of possessions. I tired to take possessions off offensively rather than defensively.”

Brandon Ingram led the Lakers with 20 points and Ivica Zubac had 10 points and eight rebounds in a starting role. JaVale McGee chipped in 10 points off the bench.

“We knew they were going to be physical and crash the boards,” said Zubac. “We knew we had to them out of there and we didn’t do that. We have to stick together and we’re going to start winning games.”

Kyle Kuzma finished with 10 points and Kentavious Caldwell-Pope had 13 points. All five starters finished in double-figures.

“I have all the faith in the world our guys will bounce back from this and continue to go down that path that we’re on, as far as geting better and playing toward what we want to be at the end of the season,” said Walton of his team.

It was the fourth and final matchup of the season between the two teams, with the Lakers franchise originating in Minnesota from 1947-1960, before moving to Los Angeles.

The Timbewolves wore their “Purple Rain” jerseys to honor the late musical artist Prince, who hailed from Minnesota.

Minnesota out-rebounded the Lakers 55-to-39, including a 22-to-9 difference on the offensive glass leading to 34 second chance points for the Timberwolves.

“They had 34-second chance points and 34 points off turnovers,” added Walton after looking over the final stat sheet during his postgame press conference. “No matter what you do, you’re not going to give yourself a very good chance of winning a game when you shoot yourself like that.”

Los Angeles committed 20 turnovers in the loss and shot 64 percent from the free throw line.

Derrick Rose suffered an ankle sprain in the first half and did not return.