Hector Hernandez thought he was “fat.” Then he received some shocking news: What he thought was stomach fat was actually a 77-pound cancerous tumor.

“I just thought I was fat,” said Hernandez of Downey, California. “I’ve always been a big guy, so I didn’t really put too much worry into it.”

Hernandez told NBC4 he would get a lot of stares in public because of his large stomach, which caused him to stop using the Metro.

“I always wore big jackets. I got in the Metro, and a police officer came and tapped me on my jacket and asked me what I had in my jacket,” Hernandez said. “He just looked at [my stomach] and kind of just felt bad and walked away.”

Hernandez began to exercise and started losing weight all over his body — except his stomach, which felt rock hard. But he said he did not feel any type of pain.

“That’s when I knew there was something wrong,” he said.

Editor’s note: An image of the removed tumor is at the bottom of this article. Viewer discretion is advised.

At the time, Hernandez had high blood pressure, shortness of breath and diabetes. His doctor performed an ultrasound, did a CT scan and some bloodwork in hopes of figuring out what Hernandez had. But despite all the tests, it still wasn’t clear what was wrong.

His local doctor referred him to surgical oncologist Dr. William Tseng at Keck Medicine of USC.

Dr. Tseng told Hernandez that it was not weight gain. In fact, he had Retroperitoneal liposarcoma, a rare cancer formed in fat cells.

“We don’t know what causes it,” Tseng said. “It has nothing to do with obesity.”

He added that it can happen to anyone.

Tseng is one of the few people who specializes in treating sarcomas and said this type of rare cancer can actually develop anywhere in the body, and it does not come with specific symptoms.

Hernandez’s tumor was in the back of the abdomen, Tseng said. He explained that because it was in that particular location, the body adapted to it as it grew.  It was able to grow to such a large size without the patient noticing because from the outside, it just appears as if the abdomen is bloated, or as Hernandez thought, it just looks like weight gain.

Tseng added that doctors who are not specialized in this field can misdiagnose the tumor or even completely miss it.

The surgical oncologist encounters this type of tumor on a regular basis and said Hernandez’s wasn’t anything out of the ordinary. But, it was “definitely the biggest one” he had come across.

The removal of the 77-pound tumor required a six-hour surgery where Hernadez’s kidney had to be removed as Tseng couldn’t separate it from the tumor.

“I’m glad my arms are back, my shoulders are back, my face is plump. I just couldn’t be any happier,” he said, adding that when he began exercising and losing weight, his body was not proportional.

Hernandez has to get CT scans every four months along with frequent checkups.

“Even though we got everything out completely, statistically it will come back in some point in his life,” Tseng said.

The sarcoma specialist told NBC4 that for the vast majority of patients, it does show up again.

“Because the tumors are so big, you really can’t get rid of the microscopic disease. There’s no way of getting all the cells out,” he explained.

If you would like to contribute to Hernandez’s medical expenses, you can do so here at his GoFundMe account. 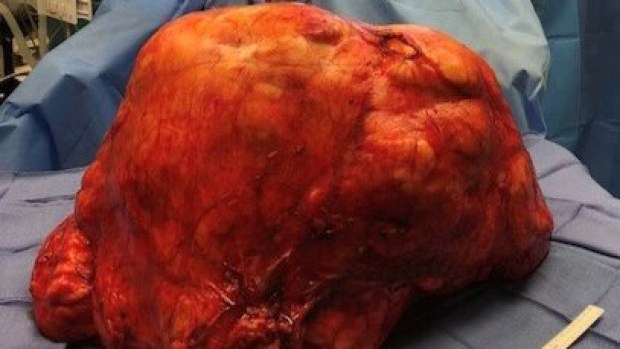 A Downey man said he though this gut was just average weight gain, but it was actually a 77-pound tumor.