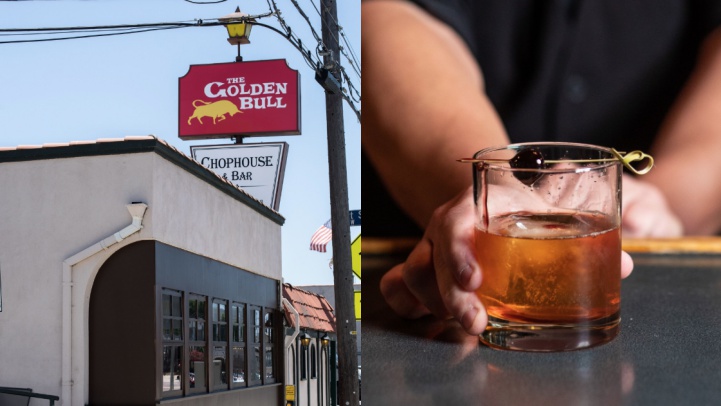 Staying power in the restaurant business?

You don’t have to be in the business to know that any restaurant that can weather the decades must be quite the special and treasured spot.

There are many around Southern California, though, of course, not as many as history-minded eat-outers would like. But one of the titans of the prime rib scene, and the vintage cocktail scene, too, still shines brightly in the Santa Monica Canyon area.

And we do mean “shine,” for “golden” is in its very name: It’s The Golden Bull, a long-trucking chophouse that can trace its savory story back to 1949.

To honor its hearty-meal’d legacy, and as a thank you to its fans, the restaurant is doing a couple of come-on-in things on Wednesday, Feb. 20, all to pay homage to a very long run. And more to come, of course.

If you’re planning to dine?

There’ll be a three-course menu available on Feb. 20, for $27. Keep in mind that The Golden Bull’s famous prime rib isn’t on the specially priced menu, though it will be available on the restaurant’s classic menu.

So what can you order for your $27 three-courser? There are several selections to choose from, including Golden Chopped Salad, Steak Frites, Roast Chicken, and Croissant Bread Pudding.

And from the bar? It’s a destination that’s become known for its timeless libations, so bet that the Old-Fashioneds and Manhattans will play a part in the day.

Look for either classic cocktail to be priced at $7 on Feb. 20.

And on the wall? Why it’s a new mural depicting Will Rogers, just in time for the 70th anniversary (cheers to artist Justin Never).

The legendary humorist was, of course, a local around the area in the years long before The Golden Bull’s debut. Call it a fitting and neighborhood-proud tribute to the early days of the canyon, and a long-runner in the dine-out, raise-a-glass supper scene.