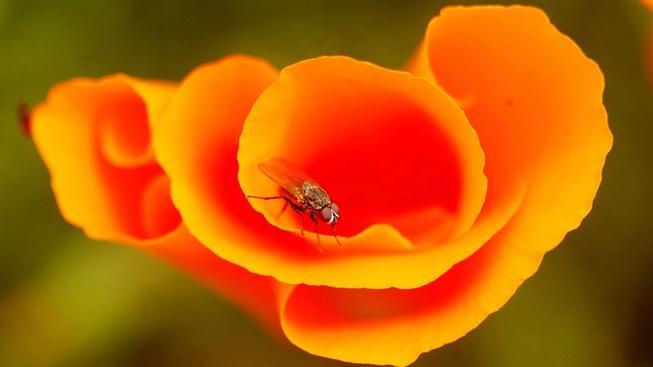 February may be the month of hearts, chocolates, presidents, and movie awards, but wildflowers do reign, too.

And lovers of wildflowers can spend a lot of the month stirring up a whole stew of superlatives.

For all eyes are on the arid areas, or at least those wilder and drier expanses that are bound to see blossoms first, even before wintertime is through.

Which means that many flower fans start to throw down the “supers,” as in “superblooms,” and we look for other epic adjectives and descriptive terms that will somehow promise us The Biggest Bloom Ever in the History of Flowers.

It’s all a little exciting, and a bit over-heated, and we’re only human, after all.

And a lot of humans around Southern California are currently watching the Antelope Valley California Poppy Reserve, one of the hot spots in our wildflower-obsessed region.

Here’s the latest just nine days before the Lancaster-close reserve’s Jane S. Pinheiro Interpretative Center opens for the season: A “great bloom” is expected for 2019, but not a superbloom.

Everyone breathe. Everyone take a moment. It’s all good. In fact, it’s “great,” which is great.

A social media update from the reserve reports that “hills are green” as of Feb. 20, though some sprigs, like forget-me-nots, are starting to show.

As mentioned, a great bloom is great, but there are things to know before you go.

There is a fee for your car.

Walking out INTO the flowers for a photo is a big ol’ nope, so plan to take your snapshots from the official trails. (That helps preserve the growing flowers from the tromp-tromp-tromp-ing of visitors’ shoes, and also keeps a whole bunch of people out of your pictures, too.)

We do apologize for going all-caps on that INTO, but some people may try, despite the reserve’s policy.

We also thought about capping “official trails,” but that seemed shouty, and who wants shouty when pondering a peaceful day out among the poppies?

No one, is the answer.

So, are you stoked? Well, great. Stow the “supers” for now, at least when it comes to the Antelope Valley scene — various desert areas may still rock that superbloom vibe — and enjoy the “great” poppy spread that should be here, fingers crossed, in just a matter of weeks.