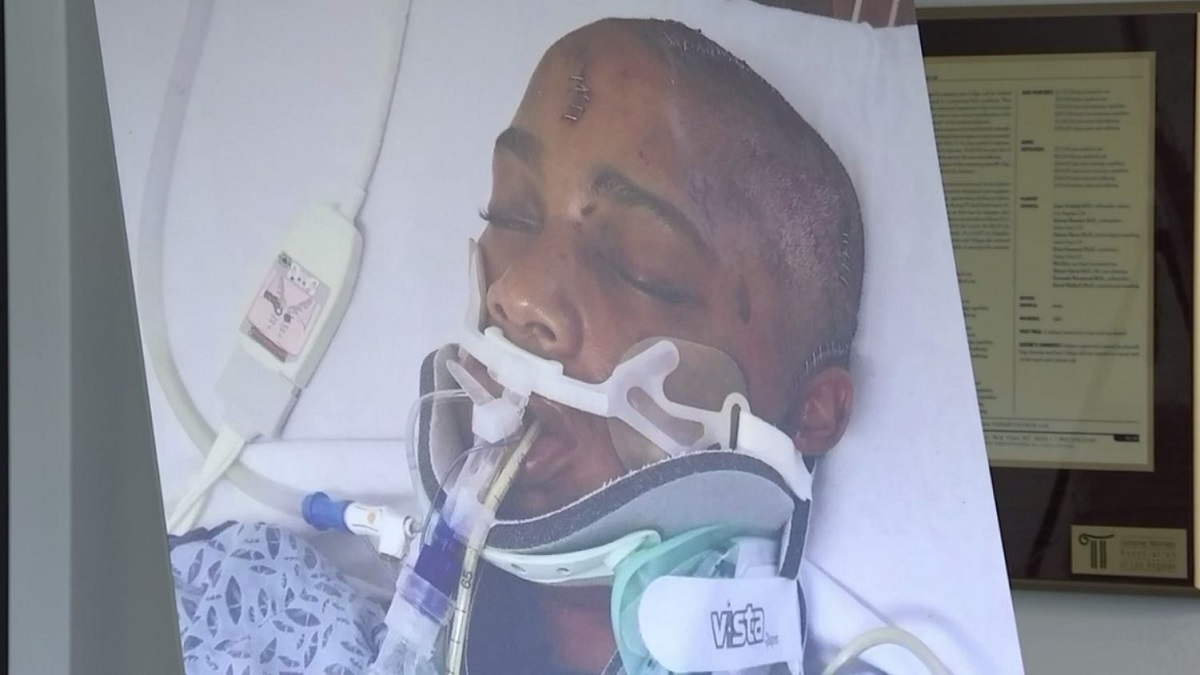 Alton Preston Jr. had gone to a neighborhood sports bar with his brother to watch the World Series on TV, but what ensued instead has left him comatose with severe head injuries, and now, more than three months later, the legal system is being asked to sort out exactly what happened and where the responsibilities lie.

“I don’t know why this had to happen to him,” sobbed wife Rahshana Preston Wednesday in the Ladera Heights office of attorney Carl Douglas. Douglas has filed legal claims seeking $195 million in compensation from multiple law enforcement agencies and the bar.

In the claim, Douglas contends that Alton Preston was attempting to act as a “good Samaritan” peacemaker and break up a racially-charged brawl that had begun in Rancho Cucamonga inside the Hide-A-While Lounge, and then spread outside, where Preston was making a phone call.

A man identified as an off-duty police officer struck Preston on the head with a beer bottle, knocking him to the ground unconscious, and then struck him again with a heavy metal sign, Douglas said the family learned from a witness whose identity they are keeping confidential.

Dominguez is named as a victim of assault in a criminal filing against Alton Preston’s brother Ryan Preston, who is also accused of attempting to flee and leading law enforcement on a pursuit that ended in a crash, causing “serious bodily injury”  to his brother, who was ejected when the car rolled over.

Douglas provided a differing narrative, in which Ryan Preston rescued his unconscious brother from the parking lot, put him in the car, and drove away with the sole intention of getting him to a hospital as quickly as possible. Douglas said unnamed witnesses told the family the crash was caused by police attempting a PIT maneuver; in the law enforcement account, Ryan Preston lost control.

Ryan Preston has pleaded not guilty, and faced a preliminary hearing Monday. Sufficient evidence was found to warrant trial. During the hearing, Dominguez was called to testify. He said he was unaware who caused injuries to Alton Preston in the parking lot, according to Douglas.

Dominguez “has a long history of engaging in unreasonable, unlawful and excessive violence, especially when he is off-duty and has been drinking alcohol, or is present in a location where alcohol is behing served,” the Preston claim asserts.

The Los Angeles Police Department declined to comment on that assertion, but acknowledged it has been investigating the incident.  Release of previously confidential officer disciplinary records was authorized by state legislation that took effect this year, but whether it applies retroactively is now under litigation.

Douglas said at one point Dominguez drew a handgun, but did not fire, and that at least one other off-duty officer was at the bar. This has been confirmed by NBC4’s I-Team, which learned that the officers reported the incident to the department, and it assigned investigators.

Douglas did not assert that Alton Preston’s injuries stemmed solely from what happened in the bar parking lot. But he said an unnamed healthcare professional told the family there were serious injuries that were not caused by a car crash.

The person who Thursday answered a call to the lounge said no comment on the incident.

Alton Preston has been employed at a warehouse and is described as the household’s main breadwinner. His wife said she now divides her time between hospital visits and caring for their two young children, ages three and six. Through a gofundme page Douglas announced, they are seeking donations for legal and medical expenses.