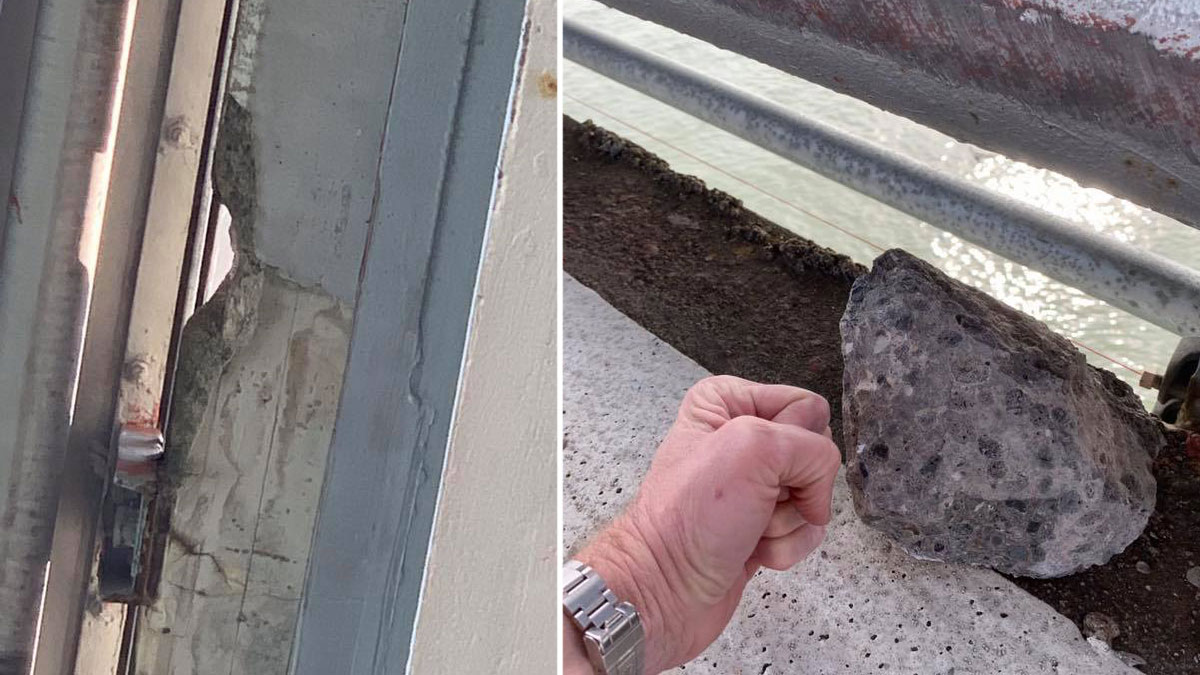 Large chunks of concrete fell from the upper deck onto the lower deck of the Richmond–San Rafael Bridge Thursday morning, prompting authorities to shut down the entire bridge, according to the California Highway Patrol.

No injuries were reported and it wasn’t immediately clear what caused the pieces of concrete to break off. CHP spokesperson Andrew Barclay said officials searched the bridge for signs of damage, but the concrete appeared to have fallen from one isolated area.

One lane of the westbound upper deck was reopened at 2:45 p.m., according to CHP Marin. Just after 4 p.m., all lanes except one eastbound lane were closed again after reports of more chunks of concrete falling.

All lanes of the bridge reopened at about 7:20 p.m., the CHP said, nearly 90 minutes after Caltrans District 4 estimated the entire bridge would reopen around 6 p.m.

One person reported around 10:30 a.m. that concrete hit their vehicle, but they declined to stop, Barclay said. The CHP responded to the scene anyway and found large pieces of concrete in the roadway.

“We are working with Caltrans HQ to determine the problem and come up with a solution,” CHP Marin wrote on Facebook.

One of the many commuters stuck on the eastbound lanes, Brittany Novella, tells NBC Bay Area that a Caltrans truck was stuck due to people trying to turn around to get off the bridge.

“Some people are walking and some people are pulling up to the side because Caltrans couldn’t get up further” to inspect the damages, Novello said.

CHP Marin responded saying “Unless you’re being directed by emergency responders this is dangerous and prevents emergency services from responding. Our response is currently delayed because everyone is doing their own thing.”

The map below shows 297 of the 336 bridges classified as “structurally deficient” in the Bay Area. Hover over a point to see more information.
Note: Point color represents sufficiency rating and point size represents average daily traffic.

In 2017, NBC Bay Area’s Investigative Unit found the Richmond-San Rafael Bridge was among 472 bridges in the Bay Area that were ranked as needing improvements, according to the most recent data from 2013.

Every two years, the bridges are inspected by engineers to make sure they are safe, according to investigative reporter Stephen Stock.

The Richmond-San Rafael Bridge was built in 1956, according to the National Bridge Inventory.

People please stop driving backwards trying to get off the bridge. wth do you think you’ll do whe you reach the Marin side? ? #richmondbridgepic.twitter.com/InHw52uOZp

Richmond/San Rafael Bridge has been completely shutdown because the CHP has observed concrete falling from the upper deck onto the lower deck. The upper deck is open & I can hear traffic rumbling overhead. I’m just wondering, how does it make me safer that I’m stuck here? pic.twitter.com/nOr5M7pDVG