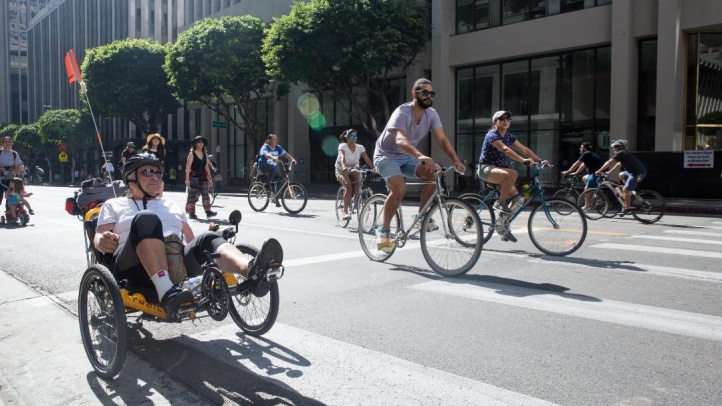 The month of March roaring in like a lion and trotting out like a lamb? As the old chestnut so colorfully predicts?

It can happen, and it will happen, again, in Southern California, in 2019, thanks to a storm blowing through as the third month revs its wheels.

The wet roaring will give over to wonderful rolling, when CicLAvia returns to Culver City for one ginormous free day of street-bound bike fun.

Make that Culver City, Mar Vista, and Palms. That’s the general spread where the next outing of the hugely attended cycle-and-stroll fest will head.

As you might expect, Washington Boulevard, or a lengthy swath of it, will be a main artery for the Sunday, March 3 event, but a bit of Venice Boulevard, and some of Motor Avenue, will play a part, too.

No cars’ll be in the streets, but people-powered vehicles, such as bikes, scooters, trikes, and the occasional unicycle will rule. Will you see pogo sticks? Maybe? If the whimsy factor is strong? Or stilts? We’re not sure we’ve seen those at a CicLAvia, but perhaps someone bold has rocked a pair.

All told, this CicLAvia go-around will cover 6.5 miles. You’ve got from 9 a.m. to 4 o’clock to cover it all, or cover some of it, or hang on a corner with a pal and watch the cycle-tacular stream on by in funky and super-fun fashion.

Food trucks, community booths, pop-up entertainment, local businesses welcoming participants, and more merriment are features of CicLAvia, which got its local start in 2010.

It’s up to you to decide, but first up: Best eye that map so you know where exactly you and your spokes should show.